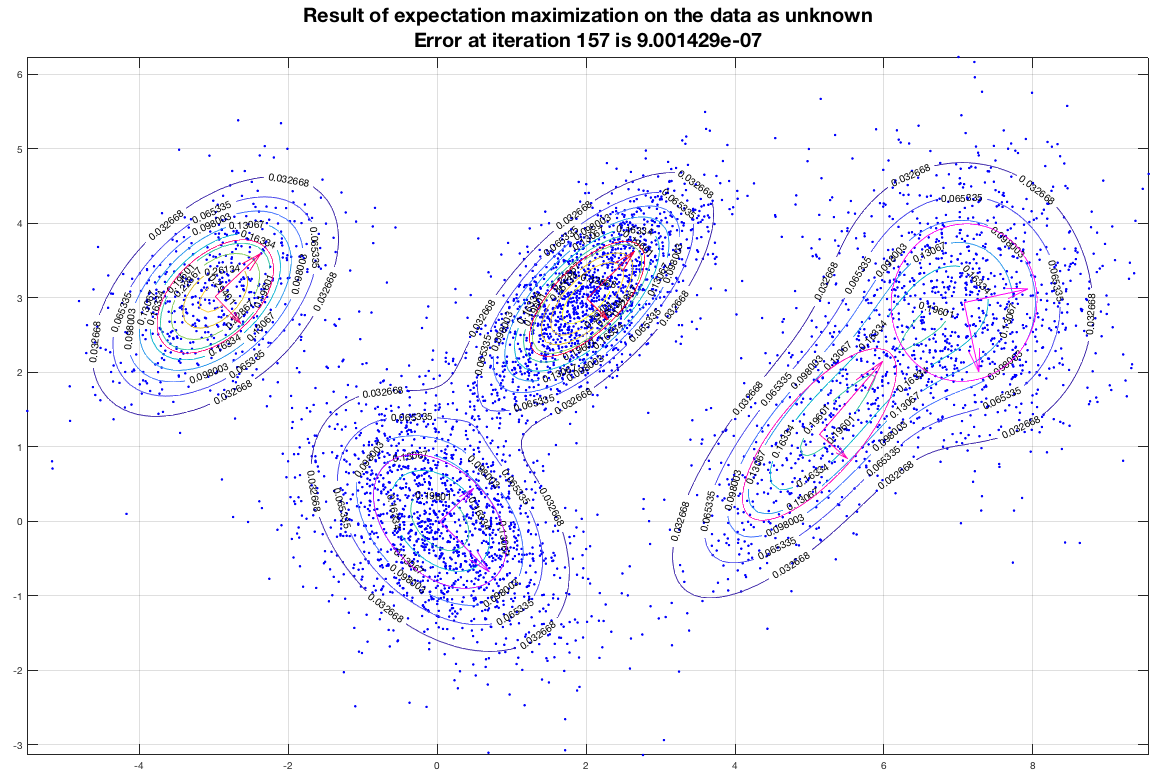 This post serves as a practical approach towards a vectorized implementation of the Expectation Maximization (EM) algorithm mainly for MATLAB or OCTAVE applications. EM is a really powerful and elegant method for finding maximum likelihood solutions in cases where the hypothesis involves a gaussian mixture model and latent variables.

EM is connected with the maximization of the (log-)likelihood function of a general form that includes a gaussian mixture of K gaussians as follows:

EM is an iterative optimization method which in essence maximizes the likelihood. Maximization of (1) in respect to the means of the gaussians results:

takes for the explanation of the observation

Solving (3) for the means of each gaussian:

Solving (3) for the covariances of each gaussian:

Solving (3) for the mixing coefficient of each gaussian, requires the application of Lagrange multipliers, which eventually results:

which says that the mixing coefficient for the gaussian

to explain the data (for every k).

Putting it all together, the EM algorithm is as follows:

* A note on initialisation: As in many iterative methods, initial conditions are extremely important. It has been proposed that a quick k-means on the data could result in a good initial estimate of the clusters in the dataset (means and covariances).

So how is this transformed into a vectorized form for efficient MATLAB/OCTAVE implementation?

Suppose we start with

dimensions in a table

. Suppose the observations are drawn from a gaussian mixture model with some unknown mixture coefficients, means and covariances. The means can be cell arrays of

vectors, one for each of the gaussians in the mixture. The covariances can also be represented by cell arrays of

. The mixture coefficients can be thought of a

At first lets say we initialize by a k-means:

Then comes the E-step of the algorithm as follows:

Next comes the more complicated M-step as follows:

Apparently the above E-step and M-step are within a loop, for example:

Checking for convergence could be based on the log-likelihood update:

Let’s take a look at an example

Suppose we create a set of 5000 2D observations drawn from a mixture of five (5) gaussians of various means and covariances with a specific set of mixing coefficients as shown in the following figure. Each class (gaussian) is denoted by a different color in the graph. Running the EM algorithm on these data and imposing that we want to end up with five (5) gaussians we get a result that is depicted in the following figure. In this figure, the contours represent equiprobable curves around the recognized gaussian distributions, the vectors in the center of each gaussian is a representation of the corresponding (square roots of the) eigenvectors (of the covariance matrix). The algorithm has converged after 157 iterations as shown, and the final estimate of the means of the gaussians moved only about 9×10-7 from their semi-final estimate.