Machine learning is a research domain that is becoming the holy grail of data science towards the modelling and solution of science and engineering problems. I have already witnessed researchers proposing solutions to problems out of their area of expertise using machine learning methods, basing their approach on the success of modern machine learning algorithm on any kinds of data. Apparently this is not a good choice and I have also witnessed failures, since those modern methods in many cases rely on an intuition on the data at hand. Nevertheless, the particular field of deep learning with artificial neural networks has already successfully proposed significant solutions to highly complex problems in a diverse range of domains and applications.

Regression, and particularly linear regression is where everyone starts off. Linear regression focuses on learning a line that fits the data. The way it works is based on an iterative minimisation of a kind of an error of the predictions of the current model to the actual solution (which is known during training). Gradient descent is usually the very first optimisation algorithm presented that can be used to optimise a cost function, which is arbitrarily defined to measure the cost of using specific parameters for a hypothesis (model) in relation to the correct choice. Gradient descent intuitively tries to find the lower limits of the cost function (thus the optimum solution) by, step-by-step, looking for the direction of lower and lower values, using estimates of the first (partial) derivatives of the cost function.

which has a very convenient range of values and a really handy differentiation property, 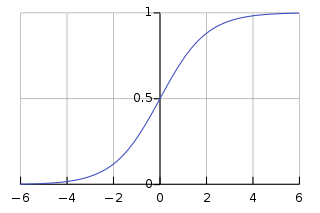 In logistic regression, instead of computing a prediction of an output by simply summing the multiplications of the model (hypothesis) parameters with the data (which is practically what linear regression does), the predictions are the result of a more complex operation as defined by the logistic function,

is the hypothesis formed by the parameters

, all in vector representations, in which

data dimensions. For consistency in the computations the data dimensions are supposed to have been augmented by a first ‘virtual’ dimension (column in the data matrix) having one (1) as a value for all samples due to the fact that there is a

first parameter, which is a kind of an ‘offset’

vector, which ideally should match the training ground truth vector

that conveys the correct class. Apparently this operation applies on all input data at once, or in batches, and this is why this is usually termed as batch training.

The typical cost function usually used in logistic regression is based on cross entropy computations (which helps in faster convergence in relation to the well known least squares); this cost function is estimated during each learning iteration for the current values of

, and in vectorised form is formulated as

Practically, the above operation may result in computations with infinity, so one might implement it in a slightly tricky way,

During the main algorithm in logistic regression, each iteration updates the

parameters to gradually minimise this error (of course if everything works smoothly, which means that a proper learning rate has been chosen–this will appear a little later). Fortunately, this simplifies to computing (in vectorised form)

which updates all the values of

is a learning rate and

is the index of the iterations (and not a power superscript!). A simple practical implementation of this is straight-forward

in relation to some arbitrary convergence limit.

Let’s see what happens when this algorithm is applied in a typical binary classification problem. Suppose there are two sets of 1000 2D training samples following gaussian distributions (for simplicity and illustration). Taken that there are only first-order data (linear terms only,

) the result of this algorithm is shown in the following figure. The algorithm successfully ‘draws’ a line separating the space for each of the classes. Of particular interest is also the ‘probability map’ shown in the middle lower diagram in pseudo-colour representation, where the solution of the prediction formula is shown for every possible combination of the data dimensions.

After this training process, the prediction formula

Everything seems perfectly fine in cases in which binary classification is the proper task. If there are more than two classes (i.e. it is a multi-class classification problem) then logistic regression needs an upgrade. This upgrade is not any sophisticated algorithmic update but rather a naive approach towards a typical multiple classifier system, in which many binary classifiers are being applied to recognise each class versus all others (one-vs-all scheme). One has to keep in mind that one logistic regression classifier is enough for two classes but three are needed for three classes and so on.

The following figure presents a simple example of a classification training for a 3-class problem, again using gaussian data for better illustration and only linear terms for classification.

The situation gets significantly more complicated for cases of, say, four (4) classes. Let’s examine a case of 4 classes, in which only linear terms have been used as features for the classification. In the figure that follows it is evident that the decision boundaries are not at all optimum for the data and the training accuracy drops significantly, as there is no way to linearly separate each of the classes.

. The change in this case is really spectacular. Let’s see a similar but even more complicated example of a 5-class classification training, in which the following features for the logistic regression are being used

* in this figure only the first 3 of the 5 θ values are shown due to space limitations.

Apparently, this is a completely different picture. Although nothing has changed in the algorithm and the code given above, now the classes are successfully separated by curves. Of course, in this case, as the dimensionality of the training data increases so does the parameter space and the

In multi-class classification applications using logistic regression, similar to binary classification, the response of each of the classifiers (the prediction) represents the probability of each unknown input to be in the ‘Class 1’ of each classifier.